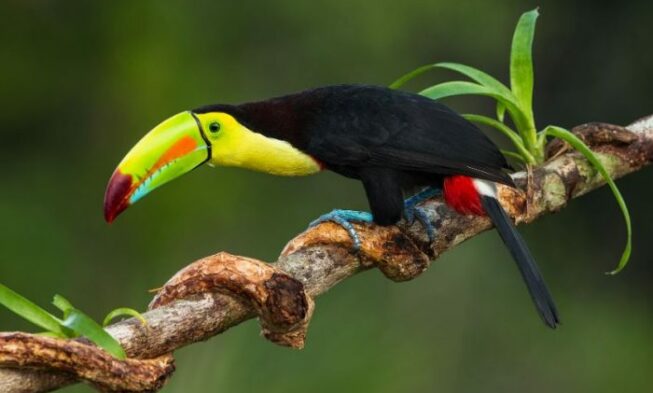 You might found something that sounds as first and strange for your ear, but the animals are really present. Here are animals that start with K that you can find when you travel abroad.

Koala is native marsupial animals from Australia. This animal can reach up to 60-85 cm long and can reach weight up to 14 KG. Koala mostly found in Victoria and half of the population in subtropical Queensland. The koala body is gray and stout, with pale color of yellow or chest with a cream color and it has mottling rump. Koala eats the leaves of eucalyptus trees. T

hey have the poor diet and make this animal have little spare energy so that most of this animals’ hours are spend to sit or sleep in the tree forks, expose to the elements but they also insulated with their thick fur.

They eat most grasses and this animal can survive without water in long periods.  Kangaroo is most found in varied habitat, savannas, woodland areas, the forest into grassy plains. This cute animal lives in organized groups and dominated with the largest male.

Kangaroo has big and strong hind legs; their large feet adapted well for leaping and long muscular tail for balancing with a small head. Kangaroo becomes the symbol for Australia.

Komodo dragon is a species of big lizards in Indonesia. These lizards are able to grow into a maximum length of 3 meters and can weigh into up of 70 kilograms. These species live in Indonesia in the island of Flores, Komodo, Rinca, radar, and Gili Motang.

Komodo dragon is venomous and their bite is dangerous as there is a massive number of bacteria’s those livings in the mouth. Komodo dragon also has a big appetite when they eat. This big animal can swallow down as much as 80% from their body percentage weight food.  Komodo dragons are known as cannibalizing to the baby dragons.

Although it has large and lumbering size, this animal has strong muscle and can move with extreme speed. The Komodo dragon can run in 12 miles per hour.

Killer whales or orca is widely popular in every single ocean. It has a familiar look with black and white color, but actually, it has different appearances, ways of communicating, diet and the behavior. This is included as the largest member from dolphin family.  Orca is called as killer whales although it actually dolphins.

Orcas is named that given from ancient sailor observation groups that hunting and preying to the large species of whales. Orcas are mammals that categorized as highly intelligent, adaptable and they can communicate and coordinate tactics for hunts. These animals have extreme swimming capability and the record for their highest speed can up to 54kph.

Kingfisher is noted for their specialty as dives in water. This bird has a large head, small feet, short-medium length tail, compact body, and long- massive bill. Kingfishers population are spread and mainly in central and southern England, becomes less common to see in the north but some declining the number of populations in the last century.

However, the research also found that the number of this bird is increasing in Scotland.  These birds are much found in still or slow moving water environment for examples, rivers in lowland areas, canals, and lake. These colorful birds are known with its dramatic ways if hunting technique.

Kitten is a juvenile cat. When they are born kitten is totally dependent on their mother and usually, they are not open their eyes until 7-10 days. After 2 weeks, kitten develops fast and start explores the world.  When the kittens are in 3-4 weeks they are starting to eat solid food and have grown their adult teeth.

Domestic kittens are usually included as high social animals and usually comfortable with the human companionship.  Kittens are animals that vulnerable because they like to hide in dark places and sometimes this can result from fatality when this small Animals That Start With K are not watched carefully.

Kudu is antelope that the number has been declined because human hunting them for their meat, horns, and hides. Horns from Kudu have the high price in Africa and uses for a musical instrument, a symbol for the ritual process, and honey containers. There are 2 subspecies of kudu, lesser kudu, and greater kudu.

These subspecies do not differ much. Lesser kudu lives acacia and Commiphora thorn bush in Savannah. These subspecies is rarely found in open or scattered bush. Greater kudu most found in bushland and woodlands.  This herbivore can up to 7-8 years in wild and can last for 20 years in captivity.

Kiwi is a New Zealand Native bird. This bird colored brown, flightless and fuzzy.  Considered to the size, this was considered as the smallest ratites. In recent years, kiwi has become endangered because of their natural predators such as cats, dogs, ferrets, and weasels that hunt their eggs and kiwi.

However, there are many conservation foundations that help and protect this endangered animal. There are many species of Kiwi. Kiwi is also known as national birds of New Zealand.

Kermode bear is a rare white bear and it often called as ghost bear or spirit bear. Kermode bear is easily recognized from the white but there are only a few people that realize if Kermode bear actually is the black bear. The white fur is coming becomes the recessive genes.  The habitat of the bear is in the coastal rainforest on the coast of British Columbia.

King penguins are the 24th largest species. King penguin will form gigantic colonies when this group comes to the shore for the mating season. One colony recorded in South Georgian Island estimated it reaches over 200.000 King Penguin gathered. The cruising speed from King Penguin, while they are swimming, is about 5-10m km per hour.

Kirk’s Dik Dik is known as species from dwarf antelope. This is common species that habitat in acacia savannas in Tanzania and Kenya. Dik-dik is herbivore and most of them are colored with fawn so that makes them easier to camouflages in a savannah environment.

This animal can reach a speed at 42km/hour. The animal lifespan is around 5 years but many of these animals can reach 10 years.  This animal when feel threatened will lie low that proposed to prevent another predator detection.  The size is between 14-18 inches tall and the weight can reach not more than 7kg.

Kestrel is also known as Eurasian kestrel or Old-world kestrel. This is one of the common birds of prey that found in Britain land. Kestrel habitat is widely varied into urban areas, farmland, and more. Kestrel uses the other species nest to use for their nest.

Koi is a special fish that popular significantly for hobbies and collector. In Japanese culture, koi become the representation of spiritual and material abundance or advancement.    Koi is the fish with colored varieties from Common Carp (Cyprinus Carpio) and use for decorative purposes in water gardens or koi ponds.

Several varieties of Koi are known by Japanese. Varieties of Koi is distinguished by escalation, coloration, patterning. The major color of Animals That Start With K is red, cream, orange, yellow, black, and blue.  The colors distinguished from Koi can impact to Feng Shui (Japanese spiritual organization of placement and objects) that can bring luck and fortune.

Krill are crustaceans that found in most of the world’s oceans. The name of Krill’s is coming from Norwegian words, krill that mean small fry fish that refer to the small size of this fish.

Krill is considered as the important trophic level in the food chain as they are feed to phytoplankton and zooplankton and covert the form that suitable for larger animals that make krill’s as the; larger parts from their diets.

Krills is commercially sale in waters around Japan and Southern Ocean. Krill also consumed by human and uses for several purposes such as cosmetic, bait in sports fishing, feeds for aquaculture and aquarium, and pharmaceutical industry.

Klipspringer is the rock-climbing antelope and becomes the resident in eastern and southern Africans mountains.  KThis animal adapted well to their diet as they can eat widely range of succulents, evergreen shrubs, flowers, herbs, seeds, and vines.

Klipspringer is the name of the Afrikaans call for “rock jumper” and refers to animals that have ability love in the rocky territory and can see in freely. This is animals that categorized as antelope that typically small and stocky.

This bird has adapted well to human development and also often found in inhabit suburban areas that provide shelter for them and enough food. Therefore, this bird is adaptable and not considered as threatened animals.