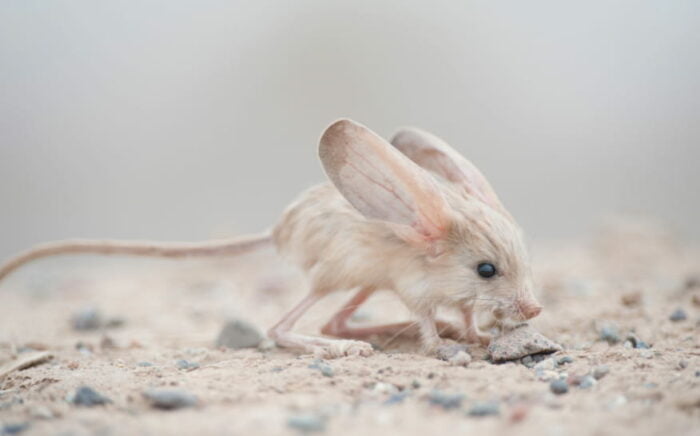 Animals with Big Ears – Here are at least 15 types of animals with big ears in the world until today. The most popular is the bat-eared fox. But, of course, there are still so many of them you need to know and we are going to explain all of them in this article.

Most animals that have big ears could hear much better than other animals with smaller ears.

Each animal uses the big ears for different purposes and one of them is to stay cool in the hot weather like in the desert. So, here are the animals with slightly bigger ears.

Rabbit or also called as a bunny is a burrowing mammal that will stay in cold climates and they look bigger than a big mouse.

Rabbit is born blind and naked. It takes several days before their fur begins to grow. Rabbit, on the other hand, is a clean animal.

They will break into your house but you can train them after all. Rabbit eats plants and grasses and this is the end of animals with big ears.

The elephant is one of the biggest animals currently living in this world. Habitat loss is the main threat that haunts them from time to time.

Other than that, people still hunt them for their ivory. The elephant eats various plants like roots, bark, bamboos, leaves, and grasses.

Sometimes they also take carrots and bananas. The adults at least will take 300 lbs. of food per day. Their population is declined from time to time.

Some people also called this species like the koala bear. However, this animal is nothing like the bear at all.

Koala is categorized as the marsupial or mammal with a pouch on its belly. Once the infant is big enough, it will hop on the back of the mother or sometimes cling on the mother’s belly.

Koala eats eucalyptus without worrying about the poison contained in the leaf. Since their digestive system is special, they are able to break the leaf down and they also get their water intake from the leaves.

Koala needs a spare space because they cling on one tree to another. Habitat loss due to the limited land in Australian made their population becomes smaller from time to time

Serval is a cat species that can be found specifically in Saharan Africa or areas close to the water. Compared to other feline species in Africa, serval is the most distinctive type.

Serval is one of the carnivorous animals on the land so they will hunt and eat smaller animals to stay alive.

Primarily, they hunt and eat rats and other rodents. Sometimes they also eat frogs and fish, small birds, and big insects.

Fennec fox is the smallest fox in its fox family but their ears are the biggest compared to other foxes. They originally dwell in the Sahara or other places in North Africa.

Fennec fox is a nocturnal animal so they can sear the heat of the desert. Their big ears could radiate their body heat so they can stay cool in the middle of the hot weather.

The community of fennec fox is pretty small, consists of 10 individual in one group. The male fox will mark the territory with their urine.

When the competitor comes along during the mating season, they could become very aggressive. Fennec fox eats rodents, eggs, insects, and reptiles as well as plants.

Caracal is one of the carnivorous mammals in the world. Instead of lynx, this animal is closely related to the serval and African golden cat.

Even though their size is considered as the medium-sized cat, they are fast enough to hunt and eat an ostrich.

Mainly, they hunt birds, rodents, rabbits, gazelles, and antelopes. They will avoid stiff fur so they will neatly shear them off using the claws. However, they are good with feathers though.

They could live up to 12 years in the wildlife and some of them could stay up to 17 years when kept in captivity. They can be found in Southwest Asia and Africa since they love to stay in deserts and grasslands.

Bushbaby or also called as galago is one of the primates you may find in Saharan Africa. They can fold their ears though.

Since they are a nocturnal animal, they will spend their entire day to sleep. Their main diets are such as insects, birds, and also fruits. They love to hop, jump, and cling around the holes in trees.

Aye-aye is the omnivore mammal that does not look like mammal at the first sight. You can only find this animal on the Madagascar Island.

Aye-aye is pretty rare today and they have relation to apes, chimpanzees, and also human. This animal has a pair of big toes and pointed claws on their finger that will help them to cling and dangle from one branch to another.

Aye-aye lives in trees of rainforest and would not come down on the ground. Since they are nocturnal animals, they will spend their entire day to curl up on the branch.

However, their life is in threat because local tribes in Madagascar consider aye-aye as bad luck. They will kill this animal. Other than that, their declined number is also affected by habitat degradation and hunting.

The next name of animals with big ears is the bat-eared fox. This fox can be found in the dry regions of Eastern and Southern Africa.

They will forage during the night up to the early morning when the weather is warmer or when the day turns colder.

They live to stay under the acacia trees and love to crawl on the arid savannah and short grasslands. Bat-eared fox eats small invertebrates and sometimes small animals along with desert truffle.

Rabies, canine distemper, and canine parvovirus are the main threats for this animal.

Their declined number is also affected by habitat loss and drought. They have pointed teeth and rarely drink water. The male ones will take the parental duty.

Long-eared jerboas are the nocturnal animal. They look like mice and rodents but they have a long tail, big ears, and long hind legs so they can jump so easily.

Their legs allow them to get around by jumping and leaping. Most of them live in Asia and North Africa.

Jerboa also does not drink water because all needs are gathered from the insects, plants, and foods. Nowadays, there are at least 33 species of this animal. In WWII, Britain took jerboa as their mascot.

Basset dog is one of the stubborn dogs and sometimes they are difficult to be trained. The experts will suggest using crate training to train them.

Once they get the interesting scent, they might try to follow the smell. It is important to keep them on lash after all.

This type of dog has the tendency to get flatulence and if this condition becomes too much, it is important to talk to your vet immediately.

One of the biggest problems on this dog breed is obesity since they love to eat and would overheat if you let them.

This dog can be too calm or too temperament. They can get along with everybody and animals as long as they love their scents.

Indoor is the place they love to stay but it is easy to make them an excellent watchdog with an excellent alert. Socialization helps them to be a down-to-earth dog.

Californian leaf-nosed bat is one of the most interesting animals in the world with its cute shape.

You can only find this creature in North America and northern Mexico. Their big ears look like leaves and they have a nose with leaf projection on it.

This bat does not hibernate or even migrate due to their short wings compared to other bats. Those pairs or wings are not suitable for traveling over a long distance.

They love to stay in mines, caves, and rock shelter. Californian leaf-nosed bat eats insects and moths. Their conservation status is Concern after all.

Sand cat is a carnivorous mammal and touted as one of the hardest cats to study since they are living in the wild.

They have foot cover that allows them to walk on the surface of the sands without having to sink themselves or leaving any footprint on it.

They can crouch down and will shut off their eyes when a light runs on them. This ability makes them hard to track because their eye would not reflect anyway.

Their fur color is like the camouflage with their surrounding environment. Most of them are nocturnal and they will dig to feed.

They eat gerbils and hunt snakes. They look very cute but they actually are one of the most powerful creatures in the wild.