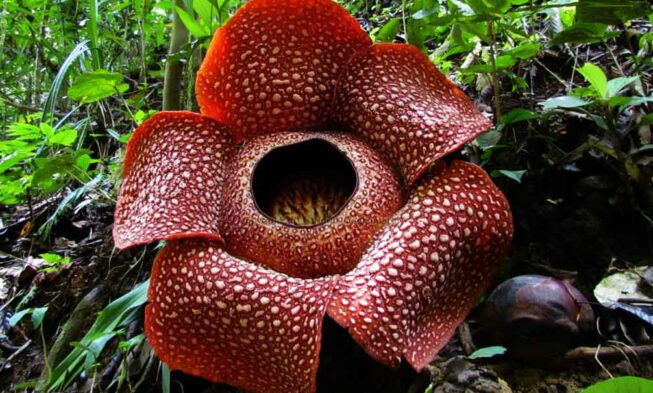 Rare Flowers – Most people love flowers since they are really beautiful. But some of them are incredibly hard to find and very rare. Below is the list of some rare flowers in the world along with the facts that you need to know about them.

Corpse Flower or Amorphophallus Titanum is the largest flower in the world. Just like the Rafflesia Arnoldi, this giant plant also comes with strong odor scent which is like the smell of carcass, that is how the plant gets its name.

Amorphophallus Titanum is originally from western Java and Sumatra Islands, Indonesia (country where many exotic plants are found). The flower is thought rare because it only blossom in a very short time. When it is flowering, unpleasant odor like rotting corpse comes out.

Grevillea is named after Charles Francis Greville and includes evergreen plant that comes from family Proteaceae.  The flower is originally from New Guinea, Indonesia, New Caledonia, and Australia.

The Grevillea flower can grow up to 115 feet in height and is also famous in some other names include silky oak, spider flower, and also toothbrush plant. The flower has bright colors and the petals have 4 lobes with relatively long style.

The bright colors of the flower are very effective to attract birds and also insects. Aborigine people use the nectar of the flower to produce sweet drink. But just keep in mind to not drink the nectar directly from the flower since it contains toxic cyanide.

Black Bat Flower or Tacca Tanchieri in Latin is a unique flower with sinister tentacles that come in long size. The flower is originally from Burma and Thailand. When it grows, the leaves of the flower can reach up to 40 cm long in size.

Meanwhile the maximum height of the plant is about 36 inches. The flowers comes with various colors include black, marron, green, and brown. The Black Bat Flower is considered since it is really hard to grow and can only survive under particular environment conditions.

Gloriosa superba or Flame Lily is a poison flower. It comes from family Colchicaceae and almost all the parts of the flower contain dangerous poison except the tuber part. You will instantly get skin irritation even if you just touch the flower.

The dangerous toxics contained by Flame Lily include alcaloids. The flower also popular in some different names such as creeping lily, climbing lily, tiger claw, fire lily, gloriosa lily, and glory lily, Flame Lily is native to Southern Africa and can grow well in tropical regions. You can find the flower in grassland, sand dunes, and woodlands.

Being extremely popular since a year ago, Monkey Face Orchid is the next flower in the list. Do you know where the orchid gets the name from? Yep, the orchid looks like the face of monkey so that it is called that so.

The orchid has Latin name of Dracula simia and unique smell of orange fruit. Being able to grow only in high places between 1,000 m up to 2, 000 m above the sea level in Peru, Ecuador, and Colombia, the orchid can blossom any time without particular season.

6. Jack in the Pulpit

The next rare flower is called Jack in the Pulpit. It is called that way due to its spadix which looks like fingers and its spathe with pouch shape. With Latin name of Arisaema triphyllum, the flower is a kind of herbaceous perennial.

It usually grows 30 cm up to 60 cm in height from a corm. Though the Jack in the Pulpit can be easily found in almost everywhere but it is originally from North America. The flower usually blooms in early spring and the leaves come with green and purple colors.

Just like the name suggests, the Bird of Paradise flower has unique shape of crane bird. That is why the flower is also called as crane flower. It is considered to be one of the most beautiful flowers on earth due to its unique bird – shaped like and bright colors.

This exotic flower is native to Africa and usually blossoms on September up to May. It can grow up to 4 feet in height and leaves are 18 inches long in size.

Hammer Orchid is a member of Orchidaceae which has 10 species and all of them can only be found in south – west part of Western Australia. It is named that way due to the shape and the unique way it moves which looks like a hammer.

This flower is so rare and hard to find, that makes it so endangered. This Hammer Orchid has unique method of pollination in which it is only the Thynnid wasp that can help the flower to pollinate.

This is because the flower will only blossom on one night in midsummer every year, before it is closed on the next morning till the next summer comes. That makes it hard to find even in the wild and the blooming is most wanted phenomena among botanists.

The first rare flower in the list is Passiflora or Pasion Flower. There are about 550 species of this Passiflora. Mainly found in tropical America, this flower is passion vines and comes with fresh fragrant.

In southern UA, the flower is called as maypop. Some of the Passion Flowers also produce fruits. The flower commonly blooms in the afternoon at around 1 pm up to 4.30 pm.

Jade Vine is also famous with another name, emerald creeper. It is native to Philippine and can grow up to 18 meters tall. Local people call the flower as Tayabak and it is strongly connected to beans like runner bean and kidney bean.

The Jade Vane flower usually grows in ravines, river sides, or damp forests. It comes with bright colors that function to attract bats for pollination. The bats will drink nectar resulted by the flower to begin the pollination process.

Another rare flower included in the list is Happy Alien Flower. With a weird appearance and Latin name of Calceolaria uniflora, the flower is perennial and evergreen plant can be found in the southern part of South Africa.

The flower is also popular with another name, Darwin’s Slipper since it was firstly found by Charles Darwin when he conducted expedition to South America. The Happy Alien Flower is about 4 up to 5 inches tall and usually grows in well – drained areas with orange and yellow colors.

Love in Mist is part of Ranunculaceae family and originally from North Africa, Southwest and South Asia, as well as Southern Europe. The flower is also popular with different names include devil – in – a – bush and nigella.

This beautiful flower has charming looks and usually flowering during spring and summer. The flower can be found roadsides, fields, waste, and rocky ground. The black seeds of the flower have aromatic scents that are commonly used for medicine and culinary purposes in Middle East, Turkey, and India.

Rafflesia Arnoldi is also called as corpse lily due to the odor smell produced by the flower. It is an endemic flower that natives to rainforests in Borneo and Sumatra, Indonesia. The flower is member of family Vitaceae and genus Titrastigma.

Rafflesia Arnoldi is also considered as the largest individual flower ever grows on Earth. The flower doesn’t have any leaves or roots. The flesh and odor flower of the plant is very effective attract carrion flies to help it in pollination.

Dart Vader Flower is a pipevine plant and native to Brazil. The flower is so rare that people can easily see it in its natural habitat. Today, the flower can only be found in botanical garden such as the one grown in Kyoto Botanical Garden in Japan.

Dart Vader Flower has unique helmet – like shaped that reminds us of popular character in Star Wars movie. The flower has beautiful purple color with distinctive smell of rotting flesh which functions to attract insects to help it to pollinate.