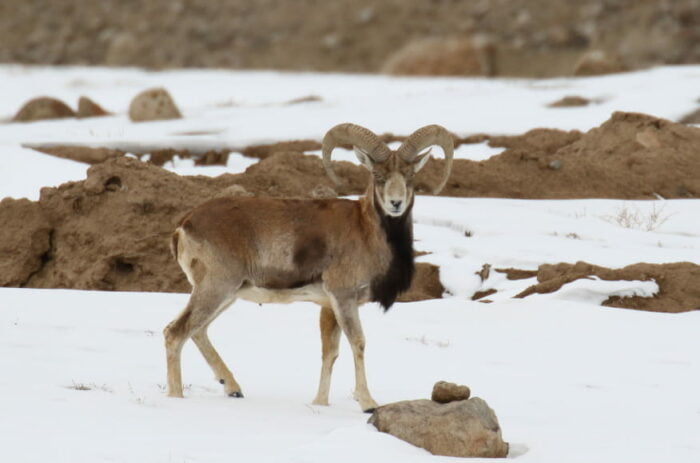 Some of these animals are endangered, and some others are stable population, and even they become stars of this list such as umbrella bird that popular because it has a beautiful song every spring to start the season.

Here are some other Animals That Start With U that you can add to your knowledge and share with your children.

Uakari is a small size of monkey. This is a type of monkey that native to the tropical rainforest in South America.

This monkey is tending found in the jungle that moist and close to the water source. The Uakari is well known for the naked face that has common ranges colors from pink into the red deep.

There are 4 distinct species of Uakari that are bald (red) Uakari, Neblina Uakari, Black-headed Uakari, and Ayres black Uakari.

Each of these Uakari types is very similar in their appearance, and differences can be found in the location and their fur color.

A Uakari can weigh around 3 kg and has an average growth of 45 cm in length. It has a very short tail compared with other monkey species from South America. Uakari lives in a group that contains member 10-30 monkeys.

The umbrellabird is known for their unique appearance, the umbrella-shaped like the crest and the pendant suspended from the throat that is the inflatable wattle.

When displayed, the male umbrella bird will spread the crest that will cover all his head and make a rumbling sound at the same time.

The Umbrellabird is able to found in the sub-tropical belt of South America and central. They spend their lives hopping between the branches in a high up of the tree canopy.

These three subspecies are known for their characterized identification. Bare-necked umbrellabird is known for the reddish and featherless patch skin in their throat.

The long wattle umbrella bird has long wattle in their throat that can grow up to 35 cm in length, and the Amazonian umbrellabird tends to be colored black in entirely where the males tend to be as largest from all three species.

Ugandan Kob is a sub-species of Kob, the antelope that can be found in sub-Saharan Africa, such as Uganda, Ethiopia, South Sudan, and Congo. It has a different color from other kob sub-species with a reddish-brown color.

The lifespan is about 17 years. The habitat is in moist savannah, in adjacent woodlands, and in floodplains.

The Ugandan kob is a medium-sized antelope that is characterized by medium-length horns, a medium brown coat, and large ears.

The Ugandan kob males are marking their territory boundaries with whistling. Kobs become an important food source for larger predictors such as lions, cheetahs, African wild dogs, and other large predators.

Uinta Chipmunk is also known as hidden forest chipmunk. This medium size chipmunk is an endemic animal of the United States.

This is a medium-sized chipmunk with the adult can range into 20-24 cm length include the 7-11 cm tail, and the weighing are average at 67 g.

The Uinta Chipmunk is a habitat in subalpine forests in the western United States and in a mountain at the elevation of 1400-3650 meters.

The maximum life expectancy is about 2 years, and in winter, they spend much of their time in dens.

In winter, there are about 27,5% of Uinta Chipmunk can survive. These animals that start with U are solitary but aggressive to other members of their species due to their defense of their territory.

Ulysses Butterfly is a unique species of butterfly that native to the tropical north of Queensland. This butterfly is considered one of the most elusive butterflies and is hard to take photographs of.

This Ulysses Butterfly is able to found in rainforests areas in Papua New Guinea, the Northern Island of Australia, and mostly in Northern Queensland.

They live in the rainforest canopy. Ulysses Butterfly wingspan is about 100-130 mm, because Ulysses Butterfly has bright color, they tend to be easily spotted by their predators, so they will fly erratically and so fast to avoid the predators. It has a common name as mountain blue butterfly.

When this dog emerges in spring, this dog will need to work fast to pass their genes as the female dog of Utah Prairie Dog is only interested in mating for one day out each year after the hibernations.

Utah used included an endangered species, but with the conservation, this animal not any longer endangered.

Uinta Ground Squirrel is only active for a few months each year. When the squirrel is active, they become diurnal.

The Uinta Ground Squirrel is life in colonies, and their adults react aggressively to others in the breeding season, and the females become intolerant more than the males.

The Uinta Ground Squirrel has 6 distinct vocalizations, squeals, chirps, trills, teeth clattering, growls, and squawks. In the wild, this squirrel is able to live up to 7 years.

Upupa is the Latin and ancient Greek call for the bird hoopoe. Upupa is a colorful bird that can be found across Afro-Eurasia, and this bird has notable because they have a distinctive feather-like crown.

There are 3 extant species of Upupa, Upupa epops, pipa Africana, and pupa marginata.

The bird has 2 basic needs for their habitat, and there is bare or lightly vegetated ground that allows them for forage and the vertical surfaces that have cavities such as cliffs, trees, and so on that need for nesting.

These basic needs are available in a wide range of ecosystems, and this makes upupa able to inhabit a wide range of areas such as wooden steppes, savannah, forest glades, heathland, and grassland.

Uguisu is also known as a Japanese bush warbler. This bird is popular because it’s beautiful sings. This bird is able to be found in Japan, Taiwan, China, and the few regions in the East. Uigusu’s tail is relatively long with straight feathers.

Uigusu has thin legs and toes with long claws that help them to stick to branches easier. The life period of uigusu is around 2-5 years.

The habitat is in lowland and in mountain forests. Uigusu is a solitary bird and will gather when breeding season comes.

In the winter months, the bird is pretty quiet, but when the early spring comes, they start to sing for attracts their bird mate.

Urial is the sub-species of wild sheep that are also known as shapo or arkar. The habitat of Urial is from Northwest India, Ladakh to southwest Russia, Iran, Pakistan, and Afghanistan.

These sheep move to rocky areas into the mountains, and the habitats consist of the grassy slopes under the timberline.

Urial is common to find in an arid country that is relatively located in low altitudes, although there is less population than found 4000 meters above the sea level in the Ladakh region.

Urial is considered a vulnerable animal to extinction, and most of their subspecies are endangered.

Urraca bird is the Eurasian Magpie bird, and this bird is named Urraca bird for the alphabetical order and for the Spanish language.

Magpie includes a member of the Crow family. Magpie is a familiar bird t recognize with their distinctive plumage in black and white.

The black feathers have a metallic sheen and the bluish-purple color along of body and splash of green in their tail. In Europe, Magpie is mostly occurring in lowland or lightly wooded countries.

Magpies birds prefer to stay in areas where it allows the opportunity for foraging in the ground, nesting, roosting, and also finding cover.

The bird is very social, and this bird often was seen nearly close to humans, and even appears quite courageous. The Urraca is a solitary bird nester.

The magpie is ranged from Europe, excluding Iceland and the western part of North Africa.

Urubu is also known as the American black vulture. The bird distribution is in the Eastern United States through Mexico, Chile, central Argentina, South America, and Central America.

The bird has a large measurement, with 56-75 cm length, and the weight ranges from 1.6kg to 3kg. There is no nest that builds by this bird.

Their eggs will be laid in a cave, hidden in rock piles, below tangles vegetation densely, in the hollow log, and in hollow beyond the large tree.

This bird is common to see in lowland and places with mid-elevation and less appearance in higher elevation. It refers to the areas with open land interspersed areas that contain wood and shrub. It is rarely seen in the mountain.